When Was The First Car Invented In The World?

The very first moving vehicle would have been designed in around 1672 in China. It was the first working steam-powered vehicle designed by a man named Ferdinand Verbiest however it was more of a large toy for the Chinese Emperor as it was unable to carry a driver or passenger.

The first self-propelled mechanical vehicle was built in 1769 by Nicolas-Joseph Cugnot however issues with maintaining steam pressure and water supply meant that the vehicle was of little practical use.

Twenty-eight years later in 1807 both Nicéphore and Claude Niépce from France and François Isaac de Rivaz from Switzerland separately built an internal combustion engine.
Nicéphore and Claude, who are said to have invented it first, decided to install the engine in a boat. It was François who used the engine to develop the automobile. Unfortunately these designs were not very successful and it wasn't until 1885 that the problems with the engine was solved.

Karl Benz is the man that solved the various issues and built a four-stroke cycle gasoline engine which was patented in 1886. By 1888 Benz has began to sell his vehicles with his company Benz & Cie, whom later became Daimler-Benz.

By the end of the 1800's the motor vehicle industry was in full swing and has, to this day, continued to grow and develop into the industry we now know.

Anonymous answered
The answer to this depends on what you call a "car". The first automobiles were not gasoline powered; they used steam as the means for locomotion. Way back in France in 1769, even before Marie Antoinette and the French Revolution, a gentleman by the name of Nicolas Cugnot devised a steam-powered conveyance called the fardier à vapeur. 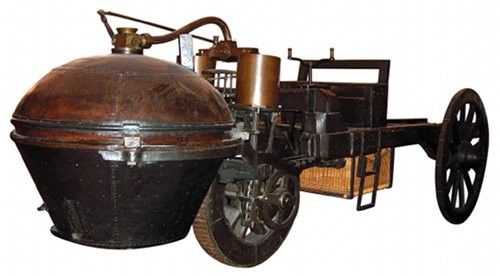 It had three wheels with a coach assembly in the middle, where one or more persons could ride, and a huge boiler mounted on the front. Unfortunately, the technology of the day being what it was, the vehicle had more drawbacks than benefits, and it never caught on.

The next attempt at a motorized vehicle came in Scotland, around 1830. Robert Anderson invented the first electric "car" – actually a horse-drawn carriage modified to fit the electric motor. Power was supplied by batteries carried on board, but the batteries were not rechargeable. By 1881 several improvements in the batteries had been made, and the electric car was catching on – amazing how things can come full circle, isn’t it?

These were the primary developments that paved the way for today’s gas-powered vehicles, along with Henry Ford’s invention of assembly line production that lowered the price so that nearly everyone could own a car.

mahendra kumar answered
The first car, if by car one means a self propelled vehicle, was invented in 1769 in France by Nicolas Cugnot; it was three-wheeled and powered by steam. The first electricity driven car was invented by Robert Anderson in the 1830s in Scotland; the invention was further improved by the American Thomas Davenport (1842).

The first gas powered car was invented in 1885 by Gottlieb Daimler; also in 1885 Karl Benz built the Benz Motorwagen with an internal combustion engine closely resembling the modern day automobile. Both the vehicles could be said to be the prototypes of the modern day vehicle, in fact Daimler built the World's first four wheeled vehicle, the Cannstatt-Diamler, which ran on a four stroke engine and can be regarded as the first car in the true sense of the word.

Both the steam powered and the electric driven vehicles could not withstand the competition from the gas powered ones and eventually disappeared from the scene. The final impetus for the gas powered vehicles was given when Henry Ford started manufacturing Model cars using an assembly line in the United States in 1913.

Jet Fighter answered
A steam-powered car was invented in 1769 by French inventor Nicolas Cugnot . The credit for internal combustion engines generally is given to German engineer, Karl Benz, who designed and built the world's first practical automobile in 1885. I hope that is what you meant and that I could help .

Anonymous answered
It was in 1763

Anonymous answered
It was in1672 by a catholic priest in China.

Anonymous answered
It was mad in 1769

Anonymous answered
In 1274 by bess roman

Anonymous answered
O wow were do you guys live in tacoma

Anonymous answered
It was invented 1550

Anonymous answered
The very first car was build in Switzerland before even French knew it ? The French got that Idea from Swiss

Anonymous answered
It was in 1866

Anonymous answered
The first car in the world was invent in 1885.